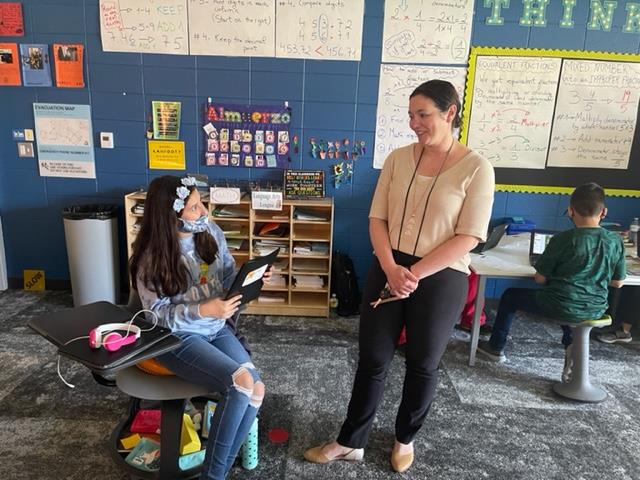 Through a Spanish-English exchange program this year, students in Victoria Garcia Blanco’s and Jennifer Matthies’s fifth grade dual language classes at Coventry have made new friends in Spain.

Garcia Blanco, a native from Spain, organized the exchange to connect Coventry dual language students with students from a school she previously taught at in Valencia, Spain. Before coming to Crystal Lake and District 47 in 2018 through a cultural exchange program called Visiting International Teachers (VIT), Garcia Blanco taught both English and French at a school called Colegio Sagrado Corazón de Jesús Vedruna. Blanco was also head of the French department and organized student exchanges with a school in France. She and her students would visit France for a week to practice the language, and then French students would come to Spain to visit them and attend school for one week.

It has been Garcia Blanco’s goal to create a similar opportunity for students here while she’s teaching in the U.S. In the fall, the fifth graders made short videos in English to introduce themselves to fifth graders in Mrs. Navarro’s students in Spain. The students from Spain then recorded their introduction videos in Spanish and Coventry students listened to the videos to practice their listening skills. Since then, students from Coventry have been paired with students from Spain to continue getting to know one another recording videos asking and answering questions, first in English and then in Spanish, or vice versa. As a culminating activity, students in both dual language classes met virtually via Google Meet with their Spanish counterparts on May 18.

“By listening to the videos recorded by the students from Spain, our students had the opportunity to listen to real and natural Spanish,” said Garcia Blanco. “It has been a rewarding experience for them as they realized there are students who also struggle to learn a second language.”

Garcia Blanco said the project has also given the students an opportunity to practice their skills and share similar experiences with students of their age. She notes, “It has been wonderful to see how students can connect no matter where they live and the language they speak since they go through the same kind of fears when they are using a language they are learning.”

According to fifth grade dual language student Hannah Munsen, “You get to meet other people who need to improve their native language, and you can help each other.”

Fifth grader Osca Sangabriel said, “This project can help people communicate with other people and meet people from Spain!”